The attitude of the English-speaking press continues to be friendly, as is evidenced by the publication of a considerable proportion of the material supplied them by this Committee, such material comprising: excerpts from our weekly Lesson-Sermon, articles from The Christian Science Monitor, news about Christian Science activities and progress in general, and also "Fragments of Thought," the last-named consisting of short citations from well-known writers, always including Mary Baker Eddy.

A full report about the Annual Meeting of The Mother Church was published in both of the English daily newspapers, the report being accompanied, in one case, by a two-column picture of The Mother Church, and in the other of the new building of the Publishing Society. One paper published a cartoon from The Christian Science Monitor, and a little later an article of general interest, also from the Monitor, due credit being given in each case. One of the great Argentine daily papers has once or twice published translations of articles from The Christian Science Monitor, the source being duly mentioned. 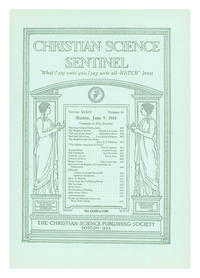