At a time when I was suffering from a disease which...

At a time when I was suffering from a disease which claims to strike terror to those falling under the mesmerism of its arguments, a trained nurse came to visit in our neighborhood. Realizing my desire for a little pleasure, she offered to escort me to town for an evening's entertainment. There we saw a sign announcing a Christian Science lecture. Laughingly she turned to me and said, "Here is something free; let us go in and hear this lecture." This was our first introduction to Christian Science, and both of us were impressed with the subject of the address, "God is Love." Subsequently I was healed of a cancer; and later both this nurse and I became Christian Science practitioners.

My little son, who was about seven years of age when I first learned of Christian Science, was afflicted with club feet and walked on his ankles, not being able to wear shoes. Each year when I bought shoes for the other children I bought a pair for him, and we gave them away after he had owned them for a few weeks. One day after I had been studying Christian Science for about two years, reading daily the Lesson-Sermons in the Christian Science Quarterly, my son came to me and announced, "This year I'll wear my shoes and we won't have to give them away." Then he showed me that he could put the soles of his feet on the floor. Within a year his feet were normal. Later he passed a military examination and afterwards rose to the rank of lieutenant.

Send a comment to the editors
NEXT IN THIS ISSUE
Testimony of Healing
Christian Science appealed to me as a beautiful as well... 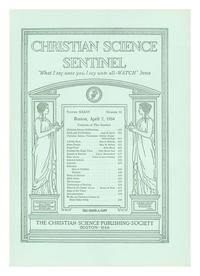