All of the world's problems arise from the fact that men do not consistently and constantly keep God's commandments, that they are not "continuing instant" in prayer. If the commandments of God as enjoined upon his followers in the precepts of Christ Jesus were efficiently and faithfully applied, no one can doubt that every problem would be solved.

The commands and messages for the guidance of mankind which Moses received by inspiration from God and transmitted to his followers were rules for daily meditation and practice, not formal rituals to be heard only on the Sabbath. He instructed his people to teach them diligently to their children, to talk of them in their homes and when they walked in the way. They were to be as frontlets between their eyes and to be struck on the posts of their doors and on their gates. Generations later, in similar words, Solomon said: "My son, keep thy father's commandment, and forsake not the law of they mother: bind them continually upon thine heart, and tie them about thy neck. When thou goest, it shall lead thee; when thou sleepest, it shall keep thee; and when thou awakest, it shall talk with thee." 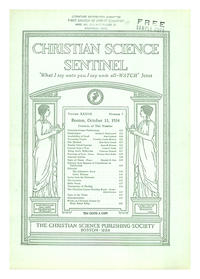