It was early spring, when the sun had that sudden warmth which makes the whole world feel young, and turns the bare branches crimson and orange with rising sap. In the gardens daffodils were beginning to show yellow, and in the fields the pussy willow was soft and silvery. But it was the children that were most noticeable of all! Everywhere, it seemed, one came upon groups of them frolicking in their joyful abandon. Driving slowly along the lanes, the writer happened upon half a dozen dancing a Highland fling upon the grass. Farther on were others tossing their caps into the air and laughing as only children can. Even in the town they were running and skipping along the pavement, singing for sheer joy.

Suddenly there came to mind the words of the Master, "Of such is the kingdom of God." The words came with a new meaning. It was as if in that exquisite metaphor Jesus was telling us—dull adults as we so often seem to be—that the kingdom is utter bliss. Indeed, he went further, for he added, "Whosoever shall not receive the kingdom of God as a little child shall in no wise enter therein;" and again, "Except ye ... become as little children, ye shall not enter into the kingdom of heaven"—the realm of innocency, the harmlessness of being. It is necessary then that we should become as care-free, as innocently gay, as vividly joyous, as the children, in order to enter the kingdom. Nor is this surprising, for we have heard that from the beginning "the sons of God shouted for joy"! The reason for this is not far to seek, because as we begin to think more deeply it becomes clear—self-evident—that only spirituality can ever attain this right idea of gayety. The word "gay," according to Webster, comes from an old German word wahi, meaning "beautiful, good"; and the reason why it is a concomitant of spirituality is that, while the heaviness which so often burdens the adult comes from the belief that evil is real, true light-heartedness comes from the understanding that good alone is real and evil unreal. 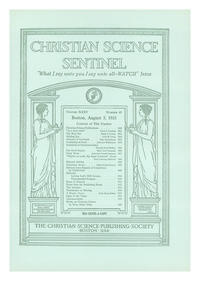