Recent issues of Emanu-El have contained some interesting...

Recent issues of Emanu-El have contained some interesting letters regarding the racial and religious status of the Jew who has embraced Christian Science. These contributions have been worth while if for no other reason than to prove that religious issues can be discussed between persons holding divergent opinions in a tolerant, fair, and kindly manner. Nevertheless, some of the statements relating to Christian Science require elucidation.

Send a comment to the editors
NEXT IN THIS ISSUE
Article
In a recent issue of your paper, you quote from an address... 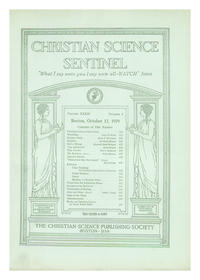