In the days immediately following the taking over by Joshua of the leadership of the children of Israel, then in full view of the promised land which they had so long sought, the successor to Moses received direct messages from God which comforted and heartened him for the great work ahead. "Be strong and of a good courage," was the divine admonition; "be not afraid, neither be thou dismayed: for the Lord thy God is with thee whithersoever thou goest."

None may, perhaps, at this day know how great was the support which the intrepid leader of Israel derived from these words from God. But we do know how bravely Joshua carried on, fulfilling the demands of leadership in a manner which not only led the wanderers into the promised land, but settled them in the country where they were destined to play a foremost part in the winning of liberation from material restrictions. Joshua through his unchanging faith in divine support proved a valiant leader in defending his people from the many enemies by whom they were beset. 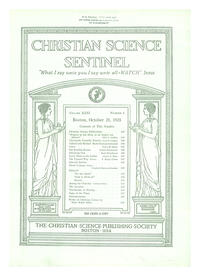