I desire to express my deep love and gratitude to God...

I desire to express my deep love and gratitude to God and to Mrs. Eddy for all the blessings and benefits I have received since I came into Christian Science about eight years ago. I had been very delicate all my life and had suffered from many troubles which did not yield to medical treatment. I had treatment from three specialists and eleven doctors. All gave me every attention and kindness, and did everything that could be done according to their understanding, and I am still very grateful to them; but when I understood that God alone is the great Healer, the only Physician, I naturally placed absolute trust in Him. I was healed very quickly of a lifelong disease of the stomach when reading for the first time "Science and Health with Key to the Scriptures" by Mary Baker Eddy; and the healing of violent sick headaches, from which I had suffered for many years, quickly followed. The symptoms of pneumonia and influenza, also many minor pains, have yielded when I have held steadfastly to the instruction (ibid., p. 495): "When the illusion of sickness or sin tempts you, cling steadfastly to God and His idea. Allow nothing but His likeness to abide in your thought."

I also had beautiful demonstrations of God's loving presence and power when on one occasion I dropped a kettleful of boiling water on my foot, and again when some boiling toffee bubbled up and flew on to my hands and those of my maid. We both simply held in thought the one word "God," with the realization of His presence and power to heal. The result was that when we took off the bits of toffee there was no trace of a burn left, and we had no further trouble in any way.

Send a comment to the editors
NEXT IN THIS ISSUE
Testimony of Healing
After consulting various physicians during a period of... 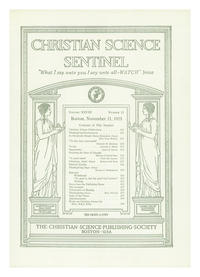