In a comparatively recent issue of the Christian Science Sentinel, a writer discussed the subject of the Christian Science practitioner and the temptation that sometimes comes to him to advise patients to make investments in some commercial enterprise that within his knowledge is being promoted, and which he may honestly believe to have great merit.

Until human thought outgrows its belief in matter, it may continue to associate itself with some form of business activity, even after having experienced healing under Christian Science treatment; but only in the measure in which such a course is permitted to fetter the individual to materialism, and thus clog his footsteps Spiritward by keeping him back from spiritual freedom, is it inconsistent with the teachings and practice of Christian Science. Every one should have respect for the sincere and honorable businessman, who conducts his business on such a sound ethical basis that even if the inventions of to-day cause the abandonment of the methods of yesterday, and the seasons of unreasoning speculation come and go, he will not be affected adversely, but will be found at his post meeting—without resort to trickery or dishonesty—his moral and financial obligations, himself prospering and causing no one to lose. 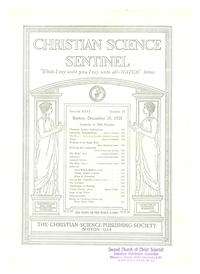