Even a casual study of the teachings of Christ Jesus cannot...

Charles E. Heitman, Committee on Publication for the State of New York,—Auburn

Even a casual study of the teachings of Christ Jesus cannot fail to impress one with the fact that healing the sick by purely spiritual means occupied a most important place in his ministry. There was nothing to which he gave more time, and certainly nothing concerning which his instructions were more specific, positive, and comprehensive. It will be recalled that when he sent his disciples forth to preach the gospel, he likewise commanded them in no uncertain terms to heal the sick; and, furthermore, when he was called upon by the messengers of John the Baptist to give evidence of his Messiahship, he promptly referred them to his healing works rather than to his religious doctrine, as evidence of his definite authority. In a word, Jesus realized that demonstration, not argument, furnished the only dependable criterion by means of which one's Christian qualities could be accurately measured. Knowing this, he said to his followers, "And these signs shall follow the that believe; In my name shall they cast out devils; ... they shall lay hands on the sick, and they shall recover."

The fact that to-day the adherents of the Christian Science religion are reproducing the works of the Master in the way he taught, healing the sick, reforming the sinner, and comforting the sorrowing through the prayer of spiritual understanding, has made a pronounced impression, not only on the ministry, but likewise on the medical profession. As an example, Dr. Richard C. Cabot of Boston, one of America's best known and highly respected physicians, said: "That Christian Science has done and is doing a vast deal of good, not only as a religion, but as a health restorer and a protest against the short-sighted naturalism of the doctors, we are firmly convinced. Its affirmations are helpful to thousands." 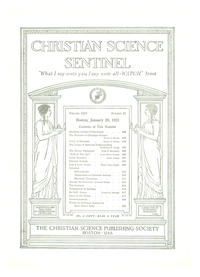