In the twenty-first chapter of the gospel according to John, it is recorded that Jesus was once obliged to rebuke a disciple for becoming unduly concerned in the affairs of a fellow-disciple. Looking with what would appear to be doubt upon John's ability to work out his own salvation, Peter had asked, "Lord, and what shall this man do?" Confident that the parent Mind is capable of caring equally well for all His children, Jesus replied, "If I will that he tarry till I come, what is that to thee? follow thou me."

One of the commonest tendencies of mankind is to be meddlesome. One of its rarest achievements is to let other people alone. Are not most of us inclined to wonder, occasionally at least, why our neighbor does not do this or that? Would not our way, instead of his, be better? Are we not tempted sometimes to think and speak unkindly of our neighbor, even before we learn what are his motives and aims? Possibly, we have concluded that we are better fitted than he to solve the problems that are his. 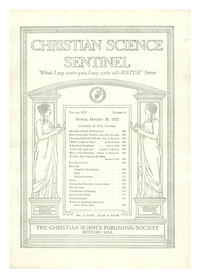