All the earth seemed hushed in a solemn stillness as through the winding parkways two men wended their way to the knoll overlooking Lake Halcyon. The day was cold, though somewhat modified by the genial sunshine. Historic Mount Auburn was a rarely beautiful scene on that wintry day! A million sparkling gems adorned the branches of the stately English poplars, the elms, and the hemlocks, while in sweeping perspective lay the lake, radiant in its crystalline beauty. By the side of a beautiful ginkgo tree there towered a circular colonnade of white granite, upon whose base, emblazoned in letters of enduring metal, are these immortal words: "The monument whose finger points upward, commemorates the earthly life of a martyr; but this is not all of the philanthropist, hero, and Christian. The Truth he has taught and spoken lives, and moves in our midst a divine afflatus" (Miscellaneous Writings, p. 166).

Here, among the departed of New England's illustrious, is a monument erected as a tribute to one whose earthly life was itself dedicated to the reestablishment of the religion of Christ Jesus, whose Christianity and Science declare and demonstrate the deathless and immortal being of man. The Master stated the purpose of his divine mission among men when he said, "I am come that they might have life, and that they might have it more abundantly." "I am the way, the truth, and the life," is the Christ-utterance of eternity. 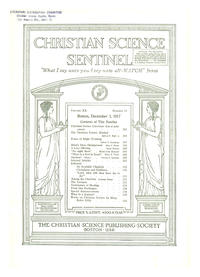