One midsummer afternoon two friends were gathering pond-lilies. One had been a student of Christian Science for some time, the other was still fresh from the wonder of her first healing. As they had not met for years, there was much to say, so even after the lilies had been captured they were in no hurry to return home, but let their little boat drift idly among the cool shadows of the willow-hung banks, telling and retelling "the old, old story," which grows ever more beautiful with the telling.

Presently, however, the radiance seemed to fade from the face of the younger student, and it was evident that in spite of her new-found physical freedom she had still much to trouble her. "I want to progress," she explained; "I want to be a good Christian Scientist, to join the local church and The Mother Church, to learn to heal people, and all that; but how can I ever hope to do anything, situated as I am? You know how things are at home. You must have noticed how opposed mother is, and father just laughs, and the rest are too indifferent to care one way or the other. I supposed that when they saw my healing they would all want to be Christian Scientists right away; but while they are glad, of course, that I am well, and admit that Christian Science did it, they do not seem to care to take it up for themselves. And the more I talk, the worse they seem to get. So what can I do, all alone among so many? 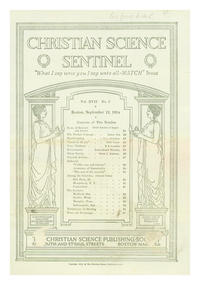