Years ago, when I was a very small boy and knew nothing of the exemption from fear which is the heritage of the normal man, I became very much imbued with the idea that there were ghosts lurking around dark corners, always on the watch to catch small boys. This state of mind was brought about by association with older children who liked to sit big-eyed in the dark and tell ghost-stories. One evening I went to pay my daily visit to my grandfather, and as I passed a certain room I saw a tall white object looming up in the darkness, and I ran to my grandfather with the fearful story that I had seen a ghost. He started to investigate at once. Taking a lamp in one hand and holding fast to me with the other, he advanced on the ghost. When at last we stood near the dreaded object, to my relief grandfather reached out his hand, touched the thing, and said: "My boy, that is only my old linen duster! Put out your hand and feel of it!" I did as he directed, and then he took me on his lap and told me that there were no ghosts, and that I must never fear them again; so from that moment I never did.

Many years passed and I became a man, and once more there came into my life a superstitions fear of various kinds of ghosts. I saw ghosts of sickness and sin, of poverty and misery, stalking throughout the land, and the people seemed to be numb with fear and helpless in their dread presence. God seemed to be so far away that He could not see the misery of His people, and sometimes I thought that He did not care. In dire extremity I cried aloud for help. Then Christian Science came into my life, bearing the lamp of Truth, and holding fast to my trembling hand, bade me approach these ghosts and learn the truth about them also. To my great relief I am now finding that these specters too are unreal. Each day I am pressing onward, following the guidance of that lamp, and each day I leave behind me ghosts that prove themselves to be nothing more fearful than was grandfather's old linen duster. 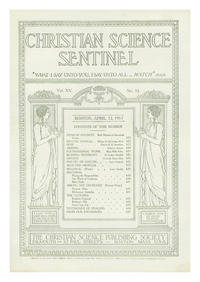