It is over three years since the Christian Science textbook...

It is over three years since the Christian Science textbook was brought into my home by a friend, and ever since that time life has had a different meaning for me. What used to be a weary, almost hopeless existence, has now become a beautiful thing, full of glorious opportunities and of joy and peace. I was not attracted to Christian Science because I consciously needed healing, rather because I was deeply sensible of a great want that I felt the services in the church to which I belonged should have filled, but which they did not; nevertheless, I had endured for seven years a pain (the result of a serious operation) which rarely left me altogether, and at times was very acute. This, however, had become so much a part of my life that it never occurred to me it might be cured; indeed, it was not until several months after its disappearance that I realized it had gone forever.

This healing came simply through the study of "Science and Health with Key to the Scriptures" by Mrs. Eddy, and with the healing came a great sense of freedom from a fear which had made my life a misery ever since the operation, the doctors having told me that in all probability a second one would be necessary. This experience alone would be sufficient cause for gratitude, but it is only one of many physical benefits that I have received through Christian Science. 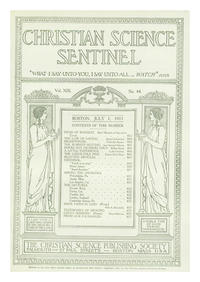