The "Administration railroad bill" has passed the United States Senate, fifty to twelve. The salient features of the measure are: Court of commerce, created to consider appeals from orders of interstate commerce commission; long and short haul clause provides for higher rates on lower mileage; low rates for destroying water competition are provided against; fines provided for failure of company to furnish statement of rates on written application; commission given authority to investigate propriety of any new rate or classification; authority also granted to fix though rates when carriers neglect to do so; shippers given right to designate through route over which property shall be carried; telegraph and telephone lines are placed finder jurisdiction of commerce commission for interstate business; injunctions regulated in certain cases where state laws are suspended.

The political victory for municipal democracy in Denver turns out to have been of exceptional importance and against enormous obstacles. The water company was defeated in its efforts to get a new franchise, though it was supported by both political machines, and a municipal water system was authorized. The initiative, the referendum, and the recall were adopted over the opposition of both machines, and the citizens' ticket was triumphant. All through the campaign, in which Judge Lindsey was active and tireless, one paper declared editorially that if, under all the circumstances, the citizens' ticket were to win, it would mean that the people of Denver endorsed the truth of Judge Lindsey's book, "The Beast and the Jungle."

Send a comment to the editors
NEXT IN THIS ISSUE
Article
THE CHURCH OR CHRIST? 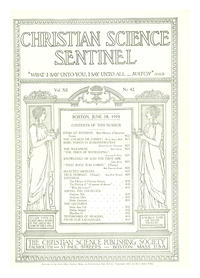