Some time ago a fire insurance exchange was formed in New Jersey, its membership including all the fire insurance companies of consequence and their representatives, and an agreement was entered into which provided that rates should be fixed for the entire territory covered by the exchange; that these rates should be binding upon all members, and that only brokers who had obrained the certificate of the exchange could do business with the companies in question on the regular brokerage basis. It shortly became impossible to mortgage any piece of property without submitting to the terms of the exchange as to fire insurance. The exchange then raised its rates for the territory about sixty per cent, and its members laughed at protests; but the attorney-general stepped in with a suit in equity, asking that the contract between the companies in the exchange be voided as representing an act ultra vires the companies. The defense of the companies was that they were merely business corporations whose doings did not touch the public interest. The court of errors on appeal declared that "if a corporation engaged in a business that is affected with a public interest, contracts to enter into a line of conduct in respect to such business that tends to affect such public interest injuriously and is contrary to public policy, such contract is ultra vires such corporation and may be restrained in equity at the suit of the attorney-general without regard to whether actual injury has resulted to the public;" that fire insurance corporations are corporations "affected with a public interest" because of the fact that such insurance has become an essential to the management of real property.

A postal savings bank bill, reported to the Senate last week, provides that there shall be established a system of postal savings depositories under the supervision and direction of the secretary of the treasury, the postmaster-general, and the attorney-general. Accounts may be opened at any postal bank by any person of the age of ten years or more, and by married women in their own names and free from any control or interference by their husbands. No person will be permitted to have more than one account. An account cannot be opened for less than one dollar and no more than one hundred dollars can be deposited in any one calendar month. 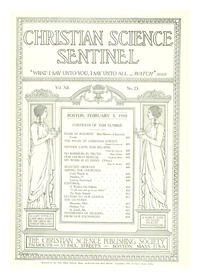