The Rev. C. M. Shaw, pastor of the United Methodist church, Springfield road, Blackpool, has resigned his position, and the resignation has been accepted by Conference with great regret. The Conference committee did their best to persuade Mr. Shaw to continue as a minister of the church, but he replied that his mind was made up. and he thought it better to decide at once. The resignation has already taken effect, and Mr. Shaw will not again occupy the pulpit at Springfield road. The wrench is a sudden one, and will be keenly felt by the congregation. Mr. Shaw has only been in Blackpool twelve months, but during that time he has made strong attachments, and has won high esteem as a thoughtful, scholarly preacher and a kindly pastor.

The reason for resignation is that Mr. Shaw has been converted to Christian Science, and his religious views have undergone such a change that he could no longer subscribe to the tenets of the United Methodist church. Last night Mr. Shaw granted a brief interview to a representative of the Blackpool Times, after a twelve-hour journey from Plymouth, where he met the Conference. He did not wish to say more at present than that he had resigned, and that he had become a Christian Scientist. He pointed out that Christian Science regarded sin and evil differently from the evangelical church, and the vicarious sacrifice was not a part of its doctrine. For some time, he said, he had been deeply impressed by the teachings of Christian Science. There had, of course, been a lot said and written about Christian Science that made it appear ridiculous, but the more one went into it and investigated, the more one was led to see what wonderful truth there is in it. There is no faith so misrepresented, and no leaders of any movement so much maligned.

Send a comment to the editors
NEXT IN THIS ISSUE
Article
A healing religion based on a fixed Principle is scientific,... 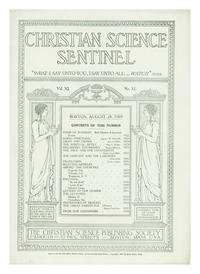