The heading of these lines, but not the subject-matter, was suggested by a very helpful article, entitled "The Church Usher's Opportunity," which appeared in the Sentinel not long ago. Very few, if any, of the members of a congregation can understand, unless they have had a like experience, just what the first appearance before a church body means to the Readers. Though theirs is, or should always be, a "labor of love," it is none the less labor, and calls forth its portion of self-giving, of effort, of care.

To one who is not a trained public speaker, the adaptation of the voice to the unusual and often large space, takes time and practice. The effort to make each word distinct across the unaccustomed distance is apt to absorb the Reader's attention to the exclusion of the proper expression, and as a result one sometimes hears from recently installed Readers the same mechanical intonation a child gives when he first begins to read aloud. The variety of tone is sacrificed to the volume of sound. The very intenseness of the Reader's desire to be about the Father's business, and that to the utmost of his or her ability, may cause an appearance of too deep concentration on the books and consequent lack of attention to the audience. 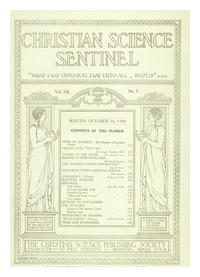