In a letter to the Consumers League, at a recent meeting in New York, President Roosevelt, in commenting on the question of child labor, says: "You are doing a work that should appeal peculiarly to every good citizen, for those you befriend are greatly in need of friends and are not powerful enough to stand up for themselves. I am particularly interested in your efforts to improve conditions under which girls do their work in the great shops, and I have an especial interest in your effort to combat the evils of child labor. There is much outcry, chiefly, I think, from the beneficiaries of abuses, against interference by the National Government with work that should be done by the State Government. The State's authority should enact reforms when possible, but if the State authorities do not do as they should in matters of such vital importance to the whole Nation as this of child labor, then there will be no choice except for the National Government to interfere. I am striving to secure either final action or else a full and thorough investigation of the matter by the authority of Congress at the present time."

The Peace Association of Friends of Philadelphia has presented to the President a memorial of that body respectfully urging upon him the importance of including in his instructions to the commissioners to the coming Hague Conference, the signing of a treaty making arbitration of all international controversies obligatory; provision for periodic sessions of the conference, whereby a recognized and authoritative code of international law may be developed; the exertion of the influence of the Government to arrest the increase of armaments and ultimately to insure their proportionate reduction, and the absolute neutrality of all private commerce in time of war. 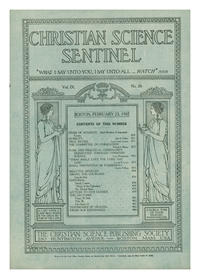