Christian Science, in common with other forms of...

Christian Science, in common with other forms of religious faith, reforms and regenerates morally and spiritually. Great numbers of Christian Scientists continually testify to improved moral conduct and to elevated spiritual experience, resulting from their interest in Christian Science. If its work were confined to this field alone, it would receive no more criticism than is incurred by forms of faith working only for moral and religious ends; but because Christian Science makes such strong and radical claims to heal disease it is sharply attacked, and because it has made these claims good by actually healing the sick and diseased it has been bitterly opposed.

That Christian Science, however, does heal the sick is sufficiently proved by the growth of the movement, which now includes thousands of people. This growth has taken place within fifteen or twenty years, and has been brought about almost entirely by the successes of Christian Science in healing disease. The growth of Christian Science is a matter of wonder when we consider the radical nature of its teachings respecting disease and sin, and the very strong tendency in us to cling to what is familiar, particularly to what has been taught us as true and final.

Send a comment to the editors
NEXT IN THIS ISSUE
Article
In a recent issue of your paper there appeared a... 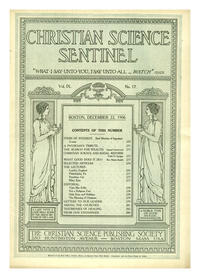