Send a comment to the editors
NEXT IN THIS ISSUE
Testimony of Healing
For some time I have felt an... 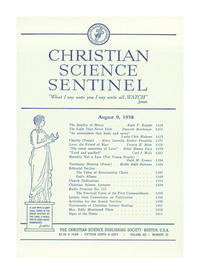