MIND'S GOVERNMENT OF THE BODY

A petition which every Christian makes when he says the Lord's Prayer is, "Thy will be done in earth, as it is in heaven" (Matt. 6: 10). The author of this great prayer made Truth practical for mankind, as his many healing works attest. Christ Jesus not only acknowledged a heavenly kingdom, in which God's will is done, but brought that kingdom into realization for mankind. Those whom he healed felt the power and authority of the divine will as it was brought to bear upon disease and sin, danger and lack, and even upon death. Jesus showed that the needs of the body are invariably supplied when God's will for man is demonstrated as the truth.

In order to prove the universality of God's control, one must realize that His kingdom is the only kingdom, and one must gain clear views of it. One must be able to look beyond the temporal, mortal sense of life to the spiritual and immortal reality. Christian Science helps one to attain glimpses of the realm of Spirit, which bring the divine control into his immediate experience. So powerful is the truth that a moment of realization of what actually exists can destroy sickness in its most bitter stages. 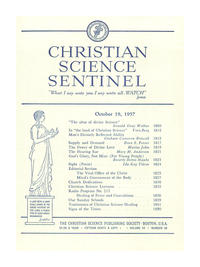