"LEAD US NOT INTO TEMPTATION"

The words of this title, occurring in the Lord's Prayer, in the form of a petition to our heavenly Father, must have puzzled many an earnest Christian, as they did the writer in her youth. She recalls asking a minister, who was preparing her for confirmation, why Jesus should have taught us to pray that God should not lead us into temptation, when temptation is generally understood to be the part that Satan plays in human experience. She was given no reply.

It was with genuine relief that many years later she found the illuminating answer. In "Science and Health with Key to the Scriptures" Mary Baker Eddy gives her spiritual sense of the Lord's Prayer. Her interpretation of the line "And lead us not into temptation, but deliver us from evil" reads (p. 17), "And God leadeth us not into temptation, but delivereth us from sin, disease, and death." How consistent this interpretation is with the nature of God as Love. Further confirmation of the truth of its statement is found in the epistle of James when he writes (1:13), "Let no man say when he is tempted, I am tempted of God: for God cannot be tempted with evil, neither tempteth he any man." 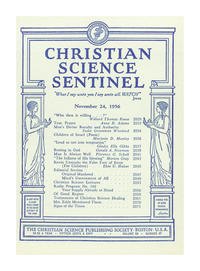