The Bible story of the woman healed of an issue of blood has been used innumerable times as an illustration of the potency of the Christly presence and the receptive qualities of faith. There is, however, a portion of this incident which may not have been, so thoroughly considered, although it contains a very helpful lesson for all students of Christian Science. According to the account given by Luke, the woman realized that she had been healed. She did not make herself known, but retired immediately into the crowd around Jesus and hid herself. However, at the Master's demand to know who had touched him, she came forward and acknowledged her healing with homage and gratitude. She then received the benediction such gratitude deserves (8:48), "Daughter, be of good comfort: thy faith hath made thee whole; go in peace."

What were some of the human qualities that might have caused this woman to try to hide? She knew that she was healed, and following events proved that she was grateful; yet Jesus had to repeat his call, or inquiry, before she came forward. Could it have been a sense of self-depreciation which held her back? Could it have been fear of what the multitude would say, a sense of self-consciousness or timidity? In any event, she stepped forward and gave her testimony, thus publicly expressing gratitude for her healing. 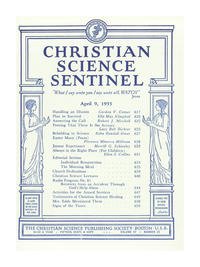