Many years ago I was healed by...

Many years ago I was healed by Christian Science of kidney trouble and colitis after spending weeks in a hospital under a famous specialist's care. When I left the hospital the doctor told me it would be wise to accept the fact that I must always live on a rigid diet. This was most discouraging, as I had lost many pounds and was too weak to walk. Christian Science was called to my attention, and my study of it began with the beautiful and inspiring Lesson-Sermon on "Doctrine of Atonement" in the Christian Science Quarterly. The realization that Life is God and that the real man is not governed by material sense was most enlightening to me.

Two weeks after treatment was begun in Christian Science I threw away all my medicines and played several sets of strenuous tennis. The symptoms of the diseases disappeared, and a year later there was a harmonious childbirth. I am grateful for an instantaneous healing of smoking which occurred when I gave up using will power and prayed to be healed.

Send a comment to the editors
NEXT IN THIS ISSUE
Testimony of Healing
Today, some twenty years after... 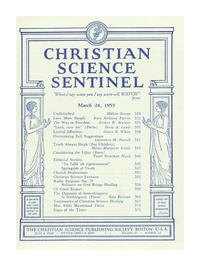