[Here is the text of the program of the above title released the week end of February 5-7 for broadcast in the radio series, "How Christian Science Heals," heard internationally over about 600 stations. This is one of the weekly programs produced by the Christian Science Committee on Publication, 107 Falmouth Street, Boston 15, Massachusetts.]

The account of healing in the program was given by Mrs. Ella May Klingbeil of Chicago, Illinois, who said:

My boys were nine and eleven at the time scarlet fever broke out in the grade school. I didn't pay much attention to it because my boys had never been ill, but one morning, just about daylight, I heard talking in the next room. On entering the boys' bedroom, I found that the older boy was delirious and had an extremely high temperature. 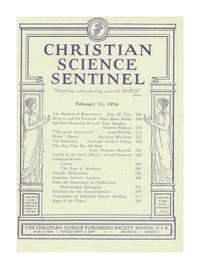