While eating my lunch in a...

While eating my lunch in a restaurant close to my place of business I was suddenly overcome by a condition of shock, followed by paralysis. I was conscious of being carried, then of feeling the motion of an ambulance and hearing the siren as we raced through the streets. After that I lost consciousness completely.

Soon I was revived and was asked the name of my doctor. I replied that I had no doctor, as I was a Christian Scientist. I was informed that I was in a receiving hospital and that, since the rules of the hospital were that no patient could be retained over two hours, I must be removed to another hospital. I requested that I be taken home, but was told that I was in a most serious condition and that my wife and daughter were on their way to see me. Desiring to send a message to a practitioner, I asked a nurse to make the call for me and to report back to me as soon as she completed the message. The nurse soon returned and reported that my practitioner had received my message and assured her that all would be well.

Send a comment to the editors
NEXT IN THIS ISSUE
Testimony of Healing
When I came into Christian Science... 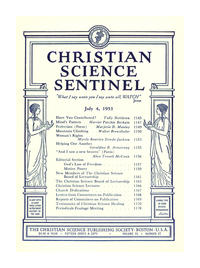