The healing ministry of Christian Science...

The healing ministry of Christian Science, revealed by Mary Baker Eddy in her textbook, "Science and Health with Key to the Scriptures," came into my life at a time of great need and fulfilled its Christly mission by restoring me to health and normalcy. I was suffering from a serious stomach disorder which had brought the medical verdict that I had not more than two months to live. Only those who have been in a similar situation can know of the utter gloom which enveloped me.

At this time I paid my first visit to a Christian Science practitioner. During that one wonderful hour I was instantaneously and completely healed. This healing took place over thirty-five years ago, and there has been no recurrence of the disease. When the practitioner assured me that Christian Science heals just as Jesus did, I was incredulous, but when I was healed, as he said I would be, I had to admit that he has been correct.

Send a comment to the editors
NEXT IN THIS ISSUE
Testimony of Healing
I was led to Christian Science... 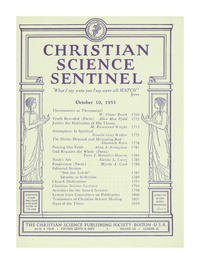