During the period covered by this report two letters of correction were sent out. In one instance an editor had referred to Christian Science as suggestion, although his intent had patently been friendly. In another instance an evangelist was sending out monthly letters containing many references to Christian Science and misquotations from the writings of our beloved Leader, Mary Baker Eddy. This Committee wrote a letter to the man, calling his attention to the above and pointing out that he had far too much by way of the good tidings of true Christianity to wish to resort to sensational misrepresentation. Thereafter the evangelist put us on his mailing list to receive future copies of his monthly letters, which did not contain further references to Christian Science. 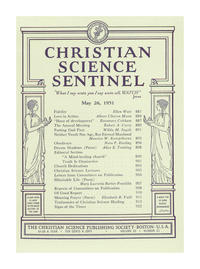