Abundance is characteristic of our heavenly Father, God; it is the necessity of His allness. Said the Psalmist (Ps. 24:1), "The earth is the Lord's, and the fulness thereof" Since man has by reflection all that is good, his supply is present now. Man, created by God in His image and likeness, is—not eventually shall be—abundantly supplied with all good.

The tendency to localize supply and thus delay its demonstration was rebuked by Christ Jesus. On one memorable occasion a crowd of people had followed him to a desert place to hear precious words of truth, and they were long without food. The disciples suggested that the people be sent to nearby villages to buy food. But Jesus said, "They need not depart." And he added, "Give ye them to eat" (Matt. 14: 16). He never based his reasoning on matter and its so-called laws. He well knew that the evidence of food was small, a few loaves and fishes. But he understood Spirit as substance, and this understanding enabled him to multiply the loaves and fishes so that all could eat. It was not necessary for the multitude to depart or to await the bringing of food. The clear view which the Master held of the affluence of good and the naturalness of plenty destroyed the evidence of lack and limitation. 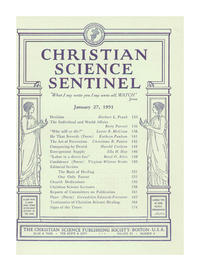