DARE TO CHANGE YOUR MIND

Occasionally it is said, often in lighter vein, "It is a woman's privilege, to change her mind." To change one's mind, however, is a privilege men and children may claim as well. It is of the utmost importance to all that they exercise this privilege when it involves the exchanging of false material beliefs for the spiritual truths of being as revealed in Christian Science; for such a change may make the difference between success and failure, happiness and sorrow, health and sickness, life and death.

The purpose of Christianity is to change humanity's thought from matter to Spirit, from the belief in the reality and power of evil to the understanding of the allness of God, good. It is related in the book of Acts (chapters 27, 28) that the ship on which the Apostle Paul was being taken to Rome as a prisoner was wrecked in a storm, and that they all escaped to the island of Melita.

Send a comment to the editors
NEXT IN THIS ISSUE
Article
WHAT CAN I GIVE? 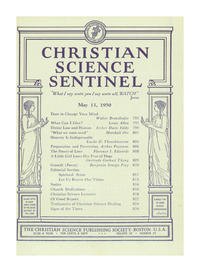