Elijah sat disconsolate under a juniper tree.He had proved so much. By Cherith the ravens had brought him bread.He had ledThe people and raised the dead.And now he sat in the wilderness, a refugee.

He had had enough, he told the Lord, and asked to die;But he knew, down in his heart, he was listening to a lie,That God once moreWould feed him and restoreHis hope. This led to Horeb, and the Lord passed by. 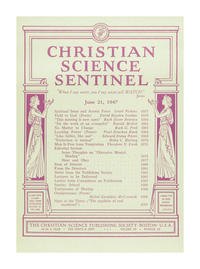