Never Too Late for Demonstration

To those confronted with the disheartening suggestion that it is "too late"—too late for the attainment of health, progress, success, or something else requisite for happiness—Christian Science offers assurances of the most positive and convincing character. It declares unequivocally that the needful help—the needful refreshment healing, or benefit of any other sort—is always available, and it explains how this fact is to be proved. In support of its teachings, it presents the experience of multitudes of men and women whom it has enabled, in the face of apparently insuperable difficulties, to achieve health, security, and satisfaction.

The belief that a lapse of time has made one's situation hopeless arises always from a mistake as to what it is that must do the necessary ameliorative work. The power at the root of every righteous achievement, Christian Science clearly shows, is not human but divine. Whatever of good appears in human experience is possible only because God, the divine Principle of all being, is good. It is the appearing in some measure to human sense, of reality; and the power by which it appears is that of reality itself. Not mere human ability but rather a yielding of the human sense of ability to the divine—a yielding of unwisdom to wisdom, of lovelessness to love, of materiality to pure intelligence or spirituality—is responsible. 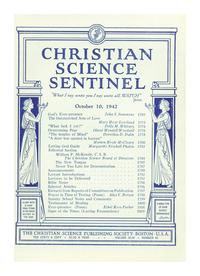