"Bring forth the best robe"

The student of Christian Science learns to separate evil from his own thought of person, that he may overcome the temptation to criticize and condemn others.

When the prodigal son, portrayed in Jesus' parable, weary of his wasteful and profilgate living, determined to return to his father's house, he was not met with criticism of his waywardness, but with the father's love and compassion. Rejoicing over his son's return, and perceiving the reformation which had taken place in his thinking, the father said to the servants, "Bring forth the best robe, and put it on him." This loving attitude toward the repentant son may well be regarded as a lesson to us to refrain from criticism and condemnation, and to meet with love those who turn homeward to the spiritual, pure, and perfect. 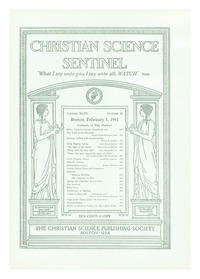