On page 74 of "Science and Health with Key to the Scriptures" Mrs. Eddy writes: "The caterpillar, transformed into a beautiful insect, is no longer a worm, nor does the insect return to fraternize with or control the worm. Such a backward transformation is impossible in Science." She adds, "In Christian Science there is never a retrograde step, never a return to positions outgrown." And on page 76 she writes, "When advanced to spiritual being and the understanding of God, man can no longer commune with matter; neither can he return to it, any more than a tree can return to its seed."

The caterpillar develops gradually; but sooner or later it undergoes a change. During the chrysalis state, its unattractive appearance gives little hint of its later grace. Finally the old binding encumbrances drop away, and there emerges a beautiful butterfly, having little resemblance to the caterpillar. 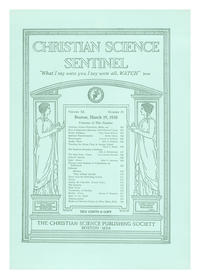