As long as mankind has problems, it will also have its struggles. In other words, as long as belief in the seeming presence of both good and evil asserts itself in human consciousness, one or the other will strive for the mastery. Accordingly, the battlefield is at all times in the human consciousness.

Paul's words, "And if a man also strive for masteries, yet is he not crowned, except he strive lawfully," have practical significance for the student of Science. Paul imposed one condition for the successful outcome of the struggle—the requirement of striving "lawfully." One has perhaps found that in wrestling with problems he has not always come off victorious, especially if he has not yet learned to distinguish between divine ideas and false human beliefs. In that event evil appears to him to be present and as real as good. Only when taught by Christian Science to sift the chaff from the wheat, to separate evil from good, and to ascribe to good sole power and reality, does he begin to think and judge aright according to divine truth, and in this way strive aright. 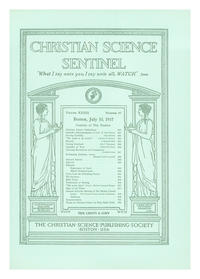