I experienced a healing in Christian Science which I...

I experienced a healing in Christian Science which I should like to relate, as it may help some beginner. I was at that time a very young student and had not learned how to use "the scientific statement of being" (Science and Health by Mrs. Eddy, p. 468), but I knew it was something to hold on to. I longed to know the meaning of "infinite manifestation." One evening at a testimony meeting I heard a man tell how he had been healed instantaneously by turning to this wonderful statement in an hour of great need. I resolved to do the same the next time anything happened to me.

Awhile afterwards, after taking dictation for several hours and being in a great hurry to reach my machine and transcribe my notes, I rushed through the suite of offices and upon pushing open a heavy swinging door I was met by another stenographer on the other side. The sharp edge of this door cut my upper lip through to the gum. Instantly I thought, Here is my opportunity to use "the scientific statement of being." I repeated it rapidly, and it had its effect, for the pain instantly subsided. Washing my face, I went over to my typewriter, feeling dazed from shock but aware that I had received an instantaneous healing. I now knew myself to be a part of the "infinite manifestation." I could not have explained it, but I knew it. Upon going out to lunch I found my lips were so stiff I could only sip a little soup, so I went upstairs to a rest room. I closed my eyes and went through "the scientific statement of being" very slowly. Thus Truth became my food. Someone offered me a Sentinel, but I only wanted to think my way through that statement. 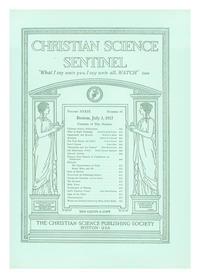