In reply to your correspondent, your readers will observe...

In reply to your correspondent, your readers will observe that most of his questions were answered in my last letter; and one does not wish to take up your valuable space and your readers' time, by reiteration. Let me again say, however, that Christian Science declares there is only one creator, God, who created man in His own image and likeness.

The world has grown tired of mere words. Men and women today are rightly demanding proof of all things, even of religion. Christian Science is known as a religion of works, and the reason for its growth throughout the world is the healing which it has accomplished. One could talk ignorantly or glibly about Euclid or logic, but this would not prove one proposition, or form a syllogism; neither can one know or prove the teachings of Christian Science without studying its textbook, "Science and Health with Key to the Scriptures" by Mary Baker Eddy.

Send a comment to the editors
NEXT IN THIS ISSUE
Article
We must realize that we are all about our Father's... 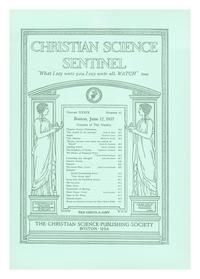