All Bible students are familiar with the remarkable healing which came to Naaman, "captain of the host of the king of Syria," as recorded in the second book of Kings. No thoughtful person can read that account and not be impressed with its simplicity and profound spiritual value. The student of Christian Science finds the moral lesson it contains of great value to him in his own progress on the way from sense to Soul. Naaman's affliction was due to wrong thinking, and his healing came about as the result of having certain mental errors corrected. We learn that he was honest and in great favor with his master; that "he was also a mighty man in valour, but he was a leper."

Now, Naaman's willingness to accept the advice of the little captive maid serving his wife, to seek help from an unfamiliar source, was the first step out of his trouble. Then we see how a false sense of his own importance and personal greatness had to be eliminated through obedience. He had also to learn that God does the healing. And when, in self-immolation and gratitude, he humbly followed the leadings of Truth, as given through the prophet Elisha, he went "and dipped himself seven times in Jordan, ... and his flesh came again like unto the flesh of a little child, and he was clean." 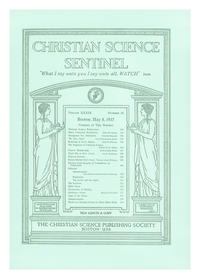