Infinite Spirit versus Spirits Many

In "Science and Health with Key to the Scriptures" (p. 550) Mrs. Eddy states that "God is the Life, or intelligence, which forms and preserves the individuality and identity of animals as well as of men." The Apostle James speaks of God as "the Father of lights, with whom is no variableness, neither shadow of turning."

We learn in Christian Science to discern the true nature, or individuality, of man as the image and likeness of "the Father of lights," Life, the one infinite Spirit. In proportion as we progress in this understanding we cease to identify ourselves and others with material personality, with the false concept of man, which apparently begins with material birth and seems to end with death. During the comparatively short span between those two dream events, various sinful beliefs and diseases appear to take possession of the mortal. 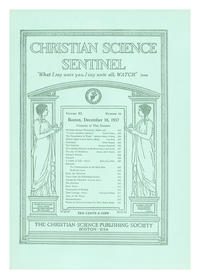