The Standpoint of Spirit

A mountain climber who had ascended a high peak stood looking toward the distant horizon. The outlook, from this point, was far different from the view he had had in the valley below. There he could see only a short distance, and all about were barriers and high cliffs. His climb had been along a difficult path, but now he was above these barriers and cliffs. He could still see them by looking down, but they were no longer obstructions.

As the mountain climber can see farther when standing on a high peak, so the student of Christian Science can see more clearly when he looks out from a more spiritual standpoint. He may still see the difficulties which trouble mortals, but as he keeps his thought above them he understands their nothingness. Sickness, poverty, and all inharmony are unrealities which mortal belief accepts as true, until thought has been lifted above them to the spiritual facts of Life. But the real man does not have to travel through the valley of materiality to reach this high place, for he is wholly spiritual and dwells forever at the standpoint of Spirit. Centuries ago, it was believed that the earth was flat, and when it was proved to be round nothing was changed but the mistaken belief. So in the overcoming of any false belief, nothing is changed except belief in the errors which had been accepted as true. 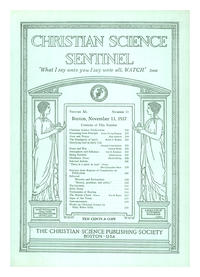