Four years ago I was suffering from arthritis, a severe...

Four years ago I was suffering from arthritis, a severe form of rheumatism. My condition was serious and steadily had been growing worse for many months, in spite of the fact that I had tried all kinds of medical treatment and had spent much time and money in going through some of the best-known medical clinics of the world. They could offer no promise of help, and sent me back home with the thought that I might never recover and should probably grow worse. I was completely helpless by then, could not move without aid, and suffered great pain most of the time. Here it was, when the way looked the darkest and there seemed no place to turn for help, that I heard the "still small voice" of Truth and I asked my wife, a student of Christian Science, to call a practitioner and see if he could help me.

A practitioner was called and treatments and the study of that wonderful textbook, "Science and Health with Key to the Scriptures" by Mary Baker Eddy, were begun. As the first glimpses of light began to filter in through the dark shadows of mortal fear, a feeling of calm came and the fear began to leave, but the physical condition seemed worse. Many discouraging days passed, but they were blessings in disguise, as I had to study harder and gain a new foothold in conquering each trial.

Send a comment to the editors
NEXT IN THIS ISSUE
Testimony of Healing
I have enjoyed the testimonies of healing for a number of... 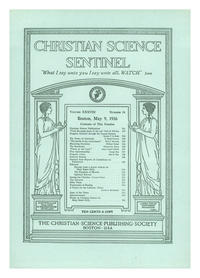