In Christ Jesus we have a marvelous example of spiritual poise. One has but to study the Gospels to be convinced of the fact. Even at the early age of twelve years this was manifest; for did not Joseph and the mother of Jesus find him in the temple, "sitting in the midst of the doctors, both hearing them, and asking them questions"? That surely indicated notable spiritual poise on the part of the youthful Jesus. And throughout his ministry, which began eighteen years later, the same spiritual balance was in evidence. How strikingly it was seen on the occasions when he confronted the multitudes, speaking to them of eternal things and proving the truth of his teaching by his works of healing! How apparent it was when he called Lazarus from the tomb, restored to life the son of the grief-stricken widow of Nain, and awoke Jairus' daughter from the deep sleep of death!

When we contemplate the career of Jesus, we cannot fail to think of his calm poise and steadfast demeanor, and always in conjunction with his compassion and love. Like ourselves he had to face the various problems of a mortal sense of existence, and to resist the temptations of the flesh; and in his solving of the problems and his overcoming of the temptations he was ever the same—the humble, perfectly poised Master. In presenting to us this particular phase of his enlightened character, Christ Jesus showed himself to be our great spiritual Exemplar. 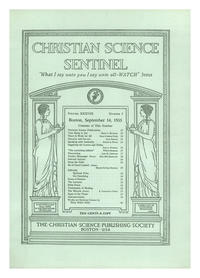