About thirteen years ago I was lying upon a hospital cot...

About thirteen years ago I was lying upon a hospital cot after a third operation. More than two years before I had entered the hospital with what was considered to be a simple fracture of an arm. After the normal period of six weeks allotted by doctors for the healing of a broken arm there was no improvement. This condition prevailed for five months, and then I was operated upon and bone was taken from one of my legs and put into my arm. This bone-grafting operation was repeated eight months later and again a year after that. No bone would grow, although massage, electricity, and medicinal stimulants were tried on me. Right here I wish to state that I had a very conscientious and loyal doctor, who did all he could for me, and I still am grateful for his loyalty and efforts, even though he could not help me. The best bone specialist in the United States was consulted, and he said that he could not try anything that had not been tried. My last operation was the worst, for infection set in and complicated matters. After getting over the effects of the ether I had a desire to read, but had no literature of any kind, so I asked a man on the next cot if he had any. He handed me a book with the statement that it was all he had, but I was welcome to it if I would care to read it. Not knowing what it was I said I would try it; and I certainly was surprised when I saw I had a copy of "Science and Health with Key to the Scriptures" by Mary Baker Eddy.

Previous to this I had challenged all creeds and doctrines and had read volumes of literature in a search for the truth about God. In this book was something new to me. Everything I read seemed a challenge to my thinking, and I was soon reading with avidity. While reading this book I saw the healing promised therein proved in the flesh. A man was brought into that hospital with both legs shattered and other injuries. Two doctors told his wife he could not live until morning; however, the wife called a Christian Science practitioner, and in a short time he was out of pain. In less than a month his shattered legs—for which a bone setting was impossible—were practically normal. Four months later I saw this man, and he was entirely normal. When I saw the results he got from Christian Science treatment I called a practitioner and had treatment, and in less than six weeks I was back at college. I had worn a cast on my arm for more than two years and feared to part with it. However, it was impossible to do my work with it on, so I removed it and placed all my trust in God and Christian Science. Needless to say, I suffered no ill results, and proper strength soon returned to that arm, which had almost withered away.

Send a comment to the editors
NEXT IN THIS ISSUE
Testimony of Healing
Through the deep sense of gratitude that I have for God... 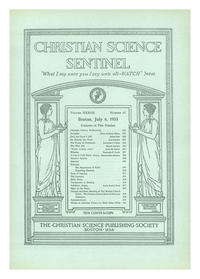