Our Gratitude in Stone

The same God who made known to Moses the moral law, as given in the Ten Commandments, who led Christ Jesus to give us the Sermon on the Mount, the essence of the Master's teachings, also guided Mary Baker Eddy to give us the By-Laws of the Church Manual, the governing law of the Church of Christ, Scientist. In "Miscellaneous Writings" (p. 148) Mrs.Eddy clearly states the motive which impelled her to provide these By-Laws for the guidance of her church and of Christian Scientists throughout the world. 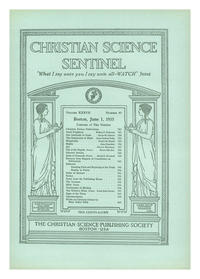