To live surrounded by those who believe intensely that matter is lasting and actual, and yet to realize consistently and demonstrate progressively that matter is but a vagary of belief—without foundation because Spirit, God, is All—is the task set for Christian Scientists. We have accepted as the rock foundation of our thinking, and as the only basis on which we can hope to make demonstrations, that succinct summary of the case for Spirit versus matter known as "the scientific statement of being." It was given to us and to the world by Mrs. Eddy and is found on page 468 of "Science and Health with Key to the Scriptures."

In the early presentation of Christian Science, the opening words, "There is no life, truth, intelligence, nor substance in matter," generally aroused definite antagonism. Even people who had been healed through another's realization of the truth contained in this statement often fought the assertion, contending that it was self-evident that matter was real because it could be seen and felt. Others at first accepted the statement on faith because of the proof of healing that was theirs. 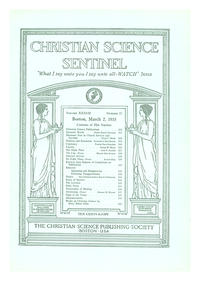