Theodore Burkhart, Committee on Publication for the State of Oregon,—Multnomah

Since Mary Baker Eddy discovered Christian Science, over sixty-five years ago, tuberculosis in many instances has been healed by the Christianly scientific practice of employing nothing but spiritual means for the healing of physical disorders. Christian Science is proving its ability to heal all manner of sickness when properly applied, and tuberculosis yields to its treatment as readily as other diseases.

Those who understand Christian Science know that it not only heals sickness, but has advantages of no small moment over other systems. In answering the question, "What are the advantages of your system of healing?" Mrs. Eddy says in "Miscellaneous Writings" (pp. 255, 256): "First: It does away with material medicine, and recognizes the fact that the antidote for sickness, as well as for sin, may be found in God, the divine Mind. Second: It is more effectual than drugs, and cures where they fail, because it is this divine antidote, and metaphysics is above physics. Third: Persons who have been healed by Christian Science are not only cured of their belief in disease, but they are at the same time improved morally."

Send a comment to the editors
NEXT IN THIS ISSUE
Article
The station announcer made the statement: "You will... 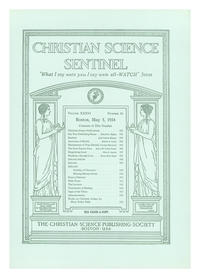