Christ Jesus knew that thoughts of some sort impel all human action. Therefore, instead of accepting merely the literal significance of the Scriptures, he turned his clear-eyed scrutiny upon their spiritual significance as well. He told his followers that their righteousness must "exceed the righteousness of the scribes and Pharisees." This true ability to apprehend unerringly the secret motives and purposes of those with whom he had to deal was characteristic of Jesus' entire ministry. Mrs. Eddy, in the Christian Science textbook, "Science and Health with Key to the Scriptures," shows her keen appreciation of the Master's scientific method in this as in every respect. One instance of this may be noted where she writes on page 234: "Jesus declared that to look with desire on forbidden objects was to break a moral precept. He laid great stress on the action of the human mind, unseen to the senses."

In dealing with the public questions of our own day Christian Scientists, following the example of Jesus, examine these questions with special reference to their mental significance. Accordingly, in discussing the merits of proposed laws, or in seeking to take a right stand on controversial issues, the chief question to be considered is, What are the motives at work "unseen to the senses"? This is especially important in dealing with the subject of prohibition, as it is called, which involves the outlawing and abolishment of the traffic in alcoholic liquor. Because this topic has been enveloped in such a mist of controversy and false propanganda, the Christian Scientist needs to weigh the current arguments with more than usual care. Human propaganda is a concerted attempt to lead people to believe what certain others would like to have them believe. It is directed argument, subserving some particular interest and prompted by definite human motives. Therefore, if we would not have our thinking "tossed to and fro, and carried about with every wind of doctrine, by the sleight of men, and cunning craftiness, whereby they lie in wait to deceive," we should be alert to detect the motives which are influencing the arguments presented to us; and as nearly as we can we should judge of them as Jesus would have judged. 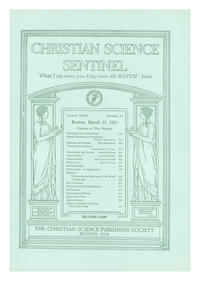