Two young men once set out to explore the mountains of Kerry, in Ireland. Coming to a wild and desolate region, without roads or even footpaths, they engaged a guide. He strode on ahead, leaving them to follow as best they could. Laughing at first, they stumbled along after him, but ere long found themselves in difficulties. Their feet sank in the hidden treacherous bogholes, and sharp bowlders tripped them up every now and again. Progress became slower and the distance between them and their guide widened. Presently the apparently absorbed and silent guide, seeing their plight, came back to them and said with emphasis, "Follow me closer, and where I put my feet do you put yours!" The two comrades, humbled by their stumbling, followed him obediently, and in good time they made the ascent; and the way thereafter led to better footpaths and roads.

Years later one of these comrades gave the writer an account of the incident, describing the difficulty they found in placing their feet on each succeeding and invariably safe spot of ground chosen by the unerring discernment of their guide. Often has the tale come back to her with warning and encouragement, and linked itself with her thought of our Leader's words from her hymn "Feed My Sheep" (Miscellaneous Writings, p. 397; Poems, p. 14), 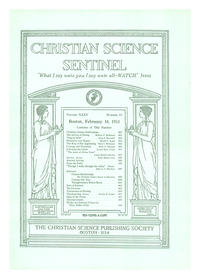