Christian Science reveals the truth of being. It shows that the unchangeable facts of being are ordained of God, and hence are spititual, harmonious, good, and eternal—like Himself. Certainly that which God is, and that which He ordains, creates, and governs, must be the entire, absolute truth. The nature of God determines the nature of all His creation, including individual man; and the laws of being are His laws. By declaring aright the nature of God, and of man as His image and likeness, by reaffirming what Jesus taught and demonstrated, namely, that God is infinite Spirit, divine Truth and Life, the universal Father, Christian Science has brought to human understanding the true idea of being.

According to this Science, the spiritual facts of being cannot be apprehended by the physical senses, but must be learned through spiritual sense, or spiritual understanding, through the God-given capacity to know divine Principle, God. The writings of Mrs. Eddy constantly direct the thought of her followers to the spititual facts of being as the basis and standard of all right thinking and acting. The commonly entertained beliefs of mortals, and their resultant experiences in daily life, are at variance with the facts of being, and can be corrected and improved only by bringing one's thoughts into accord with divine Science. When thought is improved, that which expresses it is improved. Thought which accords with the spiritual facts of being partakes of the divine nature, is healthy and harmonious.

Send a comment to the editors
NEXT IN THIS ISSUE
Article
"Song, sermon, or Science" 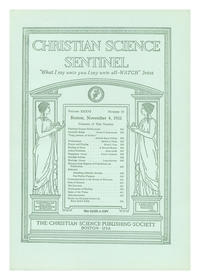